A journal about exploring the world.(pc-PC)
The capital of France, Paris! 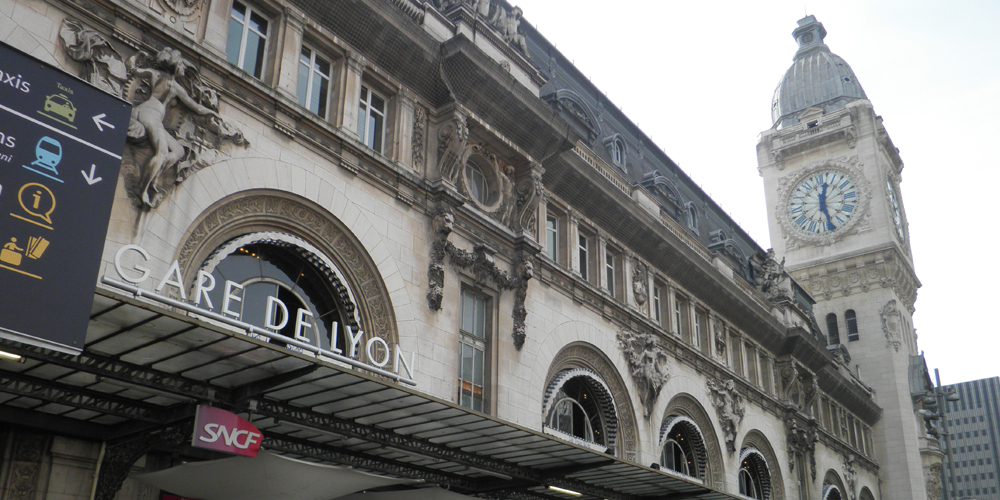 [2014/04] The entrance to Paris, Gare de Lyon. The French public railway (SNCF)、the public transportation group (RATP)、TGV、the regional rapid transit system (RER) and the Metro can be accessed from this station. If you're using TGV you can go to UK, Spain, Italy, Switzerland and Germany from here.
<<< Taking the TGV to Parisへ
Le Quartier Bercy Square >>>

The capital of France, Paris! 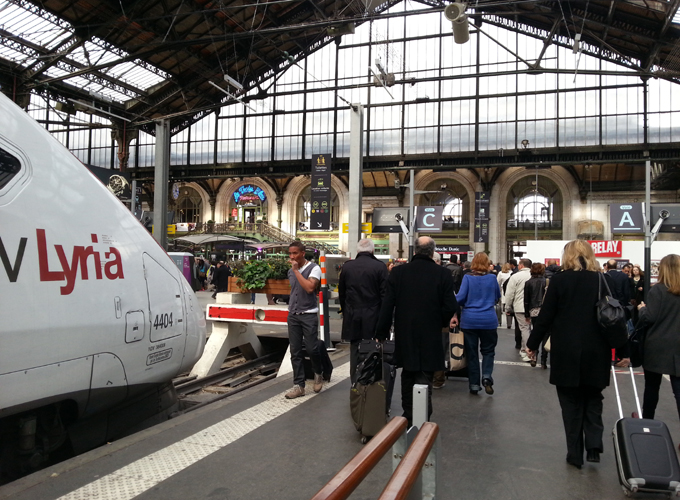 Like the bigger stations in London, the TGV is connected all over Europe, so a lot of large luggage bags and backpacks can be seen. Some people move around in the station by bike... The is a huge cultural diversity with people from all over the world. Not many Asians though. 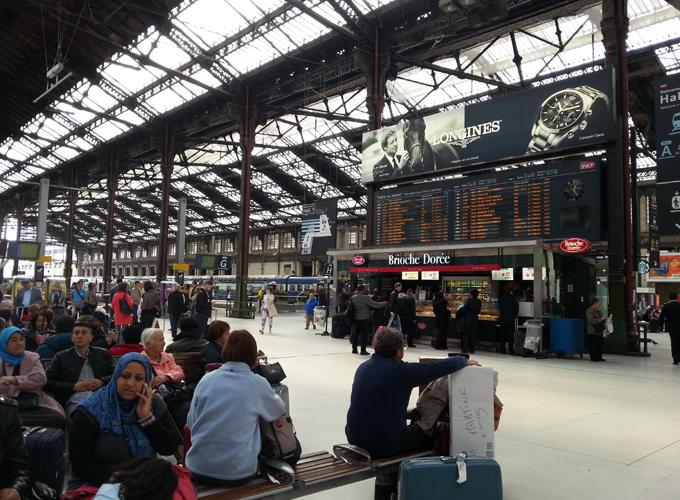 Lunch time, just after 12:00, arriving to Gare de Lyon with the TGV. First, getting a map at the information desk, then getting to the hotel. Looking at the map the hotel only seemed to be a kilometer away but as soon as we got out we saw a mish mash of roads.

"It's impossible to walk through this" I thought. I started to panic a little and my brain went into syntax error-mode.

When it comes to transportation, the TGV and the RER are good for long distance travel, and the Metro is good for moving around the city, but I've been living so long on Okinawa I've gotten used to drive where ever I go, so taking the Metro is kind of stressful. Even taking the bus is out of the question.

We wanted to take a taxi but the taxi drivers refused to take us.
Since we couldn't communicate verbally I tried to explain using gestures,
"It's too close, you can walk"...
So we had to walk... 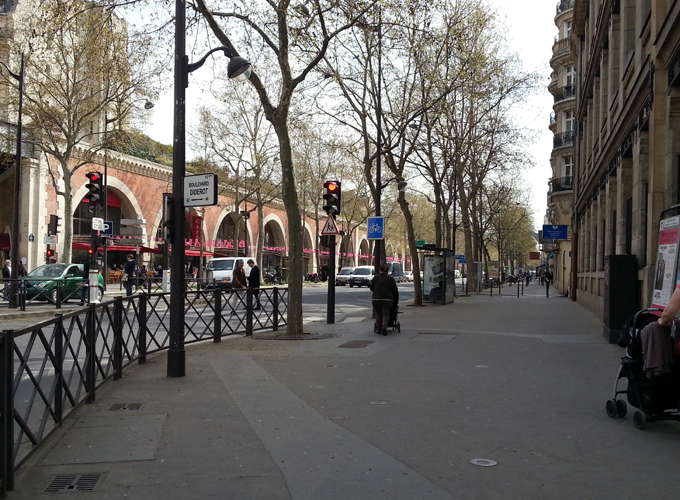 So, I had no choice but to take all the luggage and walk with my daughter to the hotel. After just one block I started to get quite anxious.

I started looking around, and behind me was a gentleman standing around.

"Parlez-vous anglais? (do you speak English?)" I asked with my not so great French.

"A little bit" he replied.

I showed him the map and asked for directions but he could only point and say "left" and "right". He didn't understand even if I spoke really slowly but he tried really hard! Well, I understood the directions (not this street, turn right in the next intersection), so I thanked him politely and continued on. Now I had to figure out which street I was on, which wasn't a big problem in Lyon, but in a big city like Paris it was easier said than done. After maundering around for a while (which is not something you want your daughter to realize), we finally found a bigger street and I knew again where we were. Cheerfully I started walking towards the hotel!

"This was a quite long walk, if only the taxi driver could drive us..."

By the way, it seemed that my French pronounciation was quite bad, but the gentleman understood me which was a relief. 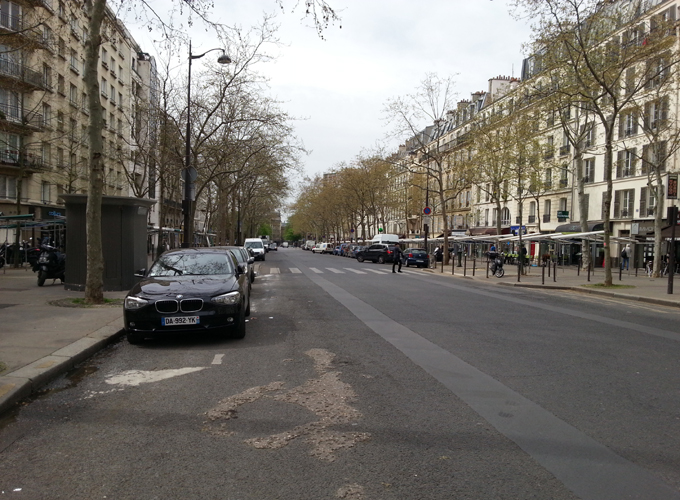 Eventually, we found Boulevard de Reuilly and the hotel!

"Yatta! We finally made it!"

Walking around in unknown territory with heavy bags, I tried my best to keep my daughter happy, panting and sweating we finally arrived at the hotel!

[Just Money Things...]
In Dubai, as well as in Paris, you can use credit cards pretty much everywhere (In Japan, cash is still king).
Just to be sure, we prepared roughly JPY5.000 per person in both Dirham and Euro but the exchange fees were quite high, so I didn't want to exchange too much.

Restaurants (brasseries of course), the Metro ticket machines, supermarkets, convenient stores, Mcdonald's, the small shops on backstreets... they all accepted credit cards. Smaller shops often had a sign saying "If less than 10 Euros, please pay with cash", so cash was still important to some extent. ATMs takes credit cards, so that was not much of a problem. And they are open 24/7! (In Japan, ATMs are usually closed during the night, some even during weekends and holidays) 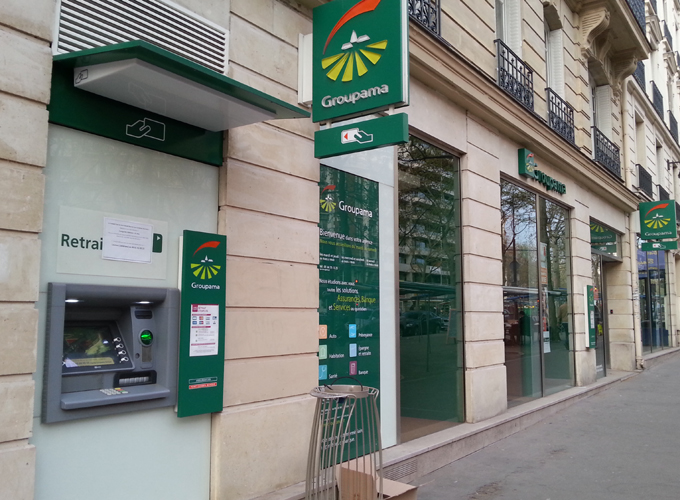 While in Dubai I was able to exchange directly from Dirham to Euro without any problem. At Narita, your money and documents has to go through a long and time consuming line of checking you might be able to get your money in the desired currency. If you're going Yen→Euro before leaving and then Euro→Yen when coming back, you will have to pay some fees, but if you do this in some of the more touristic places in Europe some scetchy places might charge up to 30%, not to mention some places don't even accept yen. So it might be a good idea to double check before leaving. [Page Top]
[Page Top]
The capital of France, Paris! - A journal about exploring the world.
Link free
Introduction of Remar Pro. International providing services.
﻿About Us
World clock
Is it Friday Today?
Translation Service.
A Journal About Exploring the World.
Remar Pro in Japanese.
Powered by RemarPro